Last quarter, Maverick’s report card contained straight A’s, except for one C which was in conduct. Did you know they give letter grades for conduct now? Well … they do, much to the misfortune of elementary-aged talkers and disruptive types all across America.

He never mentioned anything to us about it, until one day when it came out in conversation that he thought he couldn’t go to the Honor Roll ceremony with his friends because he “has bad grades.” I remember standing at the sink when he said it, stopping in my tracks and looking straight at him. “What?! Maverick, you make EXCELLENT grades!” I looked into his big eyes and realized that for almost three months, he had been operating under the assumption that his grades sucked.

After I explained that the reason he didn’t make Honor Roll was because he had a C in conduct, I watched a fire start to burn in him as he said “I am going to do better next time. I want to get on Honor Roll. If they can do it, I can do it.” I remember my mouth dropping open a little, but I collected myself and said something like he can do anything if he works hard enough.

We have never pushed him to excel academically — unless you count putting him in first grade when he was 5 years old, the youngest in his class. This year is an experiment, we are fumbling through it in the dark and just waiting to see how he does. We congratulate him on a job well done, for working hard when he does well — but we leave it at that. There is no pushing. Most of the time, I am running around like a cat tied to a stick just trying to keep him from burning the house down or poisoning a sibling with one of the “potions” he likes to mix up in the bathroom.

Parenting a child like Maverick requires a skill set that I’m not even sure I have, and energy I only possess occasionally. Lately, most of my days have been pretty rock-bottom terrible. It’s just another valley; a time when I feel too exhausted to keep pressing forward, but I have no choice but to keep going, lest I be trampled or dragged along with my face in the dirt. Sometimes I find myself in a pit where it feels like everything I’m doing is wrong. It’s lonely there. And dark.

But it doesn’t last forever.

Yesterday, Maverick came home with a report card peppered with A’s and B’s. He was bursting with pride over making the Honor Roll. I’d totally forgotten about his resolve to improve until I held the report in my hands. He did it, just like he said he would.

He has that fire. 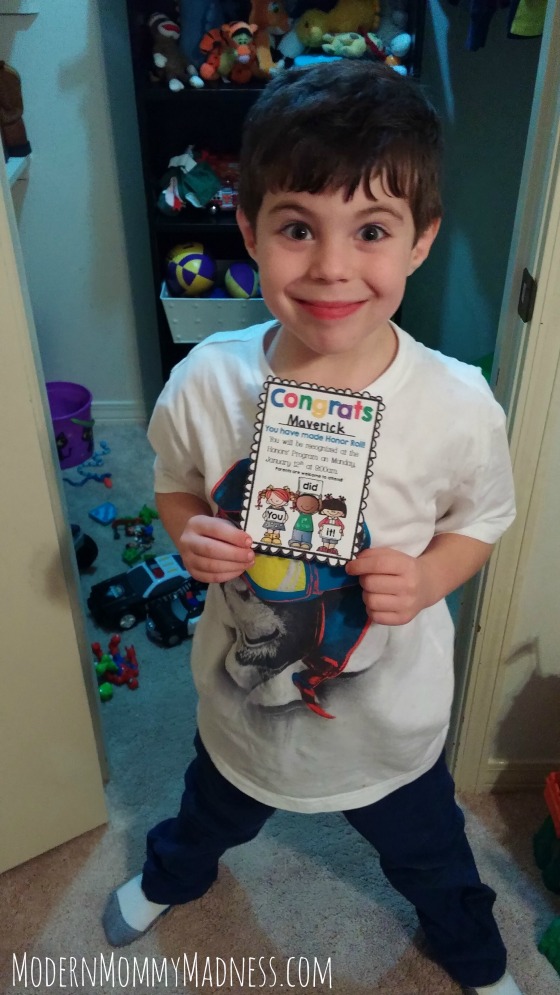 I am so proud and I am so terrified. That boy can do anything he puts his mind to, whether we want him to or not. In my soul I know that if we ever slip up and pressure him to succeed, he will fail on purpose to spite us. So we remain calmly encouraging, careful not to make too big of a production of things, all while still acknowledging his hard work. It’s like walking a tightrope.

Sometimes I lie awake at night terrified that somehow we will screw up and that fiery self-motivation will redirect to something else, something negative. What if he becomes a scientist and figures out how to make blue meth like on Breaking Bad? What if I make him really mad one day and he slips me a roofie? What if he teaches himself how to drive before he’s legally allowed to and he leaves home with a road map of the U.S., finds a life as a con man, and never comes back? WHAT IF HE TAKES THE OTHER ONES WITH HIM?

Maverick is clearly my greatest challenge, so when he does well without any prodding on my part, it’s a huge victory for me. All the battles we wage in our household take their toll on my psyche, and just when I felt like I couldn’t possibly go on because I AM A TERRIBLE MOTHER WHO CAN’T UNDERSTAND OR FIGURE OUT HOW TO BEST PARENT MY OLDEST CHILD …

The light came through.

@hobbsandhayworth turned SIX today! Yes, we honor our friendship with a birthday celebration every year, and no, we don't care that it's weird.
Write notes to your kids. It's free and they love it even if they pretend not to.
New t-shirt.
Today we found out that Asher has the exact diagnoses that his big brother has: autism, anxiety, and ADHD.
@alisontedford always posts the best content. ❤
Welp.