Last week I made an enormous ass of myself at my husband’s place of employment.

He’s a manager at a car dealership, and I don’t know what kind of people the other managers have coming to visit them at work, but I highly doubt Robbie will ask me to stop by and visit him again anytime soon.

I could offer up a thousand reasons why I was so stressed out, but the summarized version is that I was out running errands with two of my children, trying to beat the rain. We were right across the street from where he works, and I thought, you know what, I should call Robbie and ask him to come meet us for lunch. That would be a nice thing to do. So I did.

He said he could not meet us, but would we like to stop by the dealership instead? He just moved to a new store, and I have not met any of his new co-workers yet or seen his fancy new office.

I looked at the sky, which was black. I looked at our two youngest children, who were both covered in cinnamon sugar. I looked at myself, and quickly looked away. This was NOT a good time to make a first impression.

The dealership was very busy, and because I was distracted by all of the activity, I pulled in the wrong way and a mail truck was blocking my path. Robbie emerged from the building and watched as I tried and failed to maneuver our gigantic van into a parking spot as our over-excited children shrieked and screamed “DADDDDDDDY! DAAAAAAAAADDY!” from the backseat.

My 4-year-old unbuckled himself and slammed into the back of the front passenger seat as I rolled over a curb. “WHY ARE YOU UNBUCKLED?!” I screeched as I threw it into reverse. By now a crowd was gathering. Robbie visibly cringed as I tried once more to squeeze our vehicle into a too-small spot. And that is when it happened.

Maybe it was all the errand-running. Maybe my nerves were shot, and my blood sugar was low and I was over caffeinated. Maybe I should have declined his offer to come visit and maybe I should have worn a more flattering outfit and MAYBE I HAVE NO BUSINESS DRIVING THIS MOTHER FUCKER OF A VAN.

Muttering unrepeatable phrases under my breath, I squealed off, again in the wrong direction, trying to turn around. By now everyone was definitely staring, and I was furious — with myself, with my husband, with the screeching children, and with life in general.

I drove directly into a dead end portion of the Hyundai lot and screamed. Then I realized that my window was rolled down. 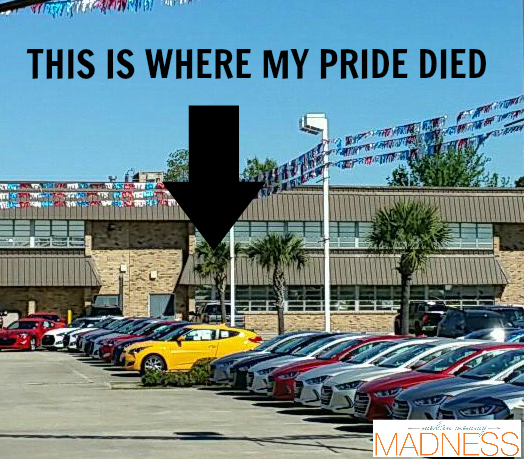 This is the actual dealership where my pride passed away.

Two salesmen were watching me, and I imagined the following conversation taking place:

Salesman #1: I hope she hits one. That would be AMAZING.

I finally made it back around to the appropriate parking space. My husband unloaded our stunned children and I sat in the car, too mortified to exit the vehicle. “We can sneak in through the courtyard,” Robbie said. “There’s a back door. No one will see you.”

I got a baseball cap out of my bag and pulled it low over my face. I avoided eye contact as we sneaked in through the back door. Because that’s what my life has become.

10 thoughts on “The Day My Pride Died”