I’ve been married to Robbie for 12 years this October, and for almost our entire relationship, I didn’t believe that he truly loved me.

I mean, I thought he thought he did, and if someone thinks they love me, as has been the case in 95% of my relationships, that has always been good enough. I didn’t believe that I was worthy of genuine love, but I wasn’t fully aware of that belief. It lingered in the back of my subconscious, manifesting in the nagging voice that tells me I’m not pretty enough, smart enough, talented enough, or good enough to amount to much of anything.

I built a wall.

The wall was up when I met Robbie, and as far as I know, parts of it are still there. Alcohol gave me the courage I needed to step out from behind it on occasion, and quite honestly, I miss the ease that comes with drinking. Sobriety is a lot of work. So is overcoming obstacles. I am effing exhausted.

Sometimes, I really, really think it would be easier just to keep the wall up, smear some extra concrete on it, and stay in hiding forever.

When a person goes through trauma, it literally rewires the brain. Addiction rewires it, too, which means that my brain has a lot of overdue healing to do. For a very long time, I functioned at what I considered to be a high capacity; looking back, I can see that I’ve never allowed myself or my marriage to reach its full potential. I assumed my husband thought he loved me, which was good enough because I really could not stand myself, and I drank to cope with the feelings that go along with self-loathing.

That is no way to live. I am allowing myself to get better because I want to LIVE.

It’s a weird thing to have to look in the mirror every morning and tell my reflection, “You are good enough.” This was an assignment given to me by my therapist.

“You’ll feel weird doing it,” she said. “But it’s important.”

But I haven’t followed through, not yet. The words sound hollow because I still don’t believe them, and I always cringe, because ew, affirmations. 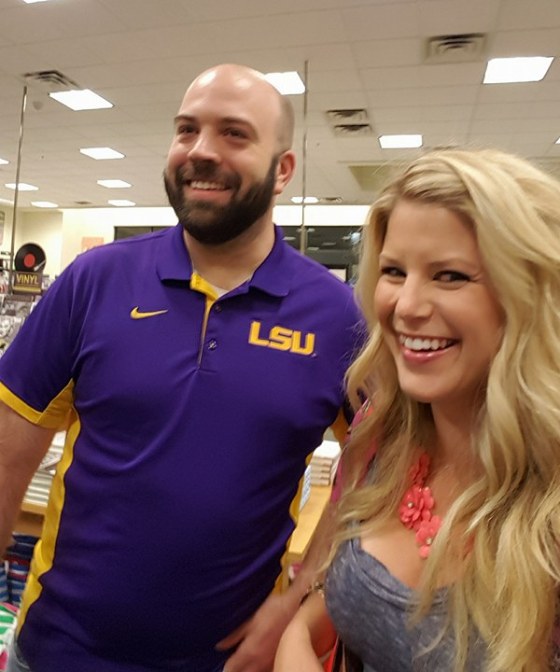 Robbie + Harmony on a date.

I sit on the couch next to Robbie. There’s a dip in the spot where he always parks himself — I call it The Hole — and my body slides over next to his by sheer force of gravity.

“Hi,” I say, smushing my left shoulder into his right armpit.

“Hi.” I think he feels crowded, but like I’ve told him a thousand times before, maybe he should consider sitting in another spot on the couch, a spot that is less like a giant hole.

“You love me,” I say, not like I’m testing his reaction or fishing for something. I say it with reverence. I’m stating a fact.

I no longer think he thinks he loves me. I know that he knows that he does.

I’ve given him a lot of reasons to excuse himself from the relationship. The cat’s out of the bag — I’m not the perfect wife or mother — I am an alcoholic. I’m flawed, I’m aware of my flaws, and I’m working on improving them. I’m not pretending anymore. And as screwed up as I may be, he won’t leave. Not today. Not ever.

And for the first time, I actually believe that I’m safe with him.

I know that I am.

10 thoughts on “Marriage In Recovery”