I took him to have his stitches removed today. Stitches should be easy to remove, right? Just a little snip-snip? He did great when they took staples out of his head, which literally just happened. Maybe I’m becoming desensitized due to the frequency of events and this is why I assumed today would be easy.

I took the baby with us, thinking she would just sleep the whole time, and we would be home before lunch. I was ill-prepared for what awaited us. I had no snacks. I had no fun and interesting anything in my bag. I had nothing I needed, including my wits.

Today I learned (because I asked) that it’s not legal for the pediatric office to sedate a child. That’s unfortunate. My child needed sedation. He struggled so hard while being held down for the stitch removal that he busted his wound wide open again, and had to be re-stitched. They had to call in their two biggest nurses to hold him down while I fanned him (they thought he was hyperventilating) and willed myself not to lose it.

When it was all over, Dr. Patterson declared “I think we all deserve a cocktail!” And we all — me, the two nurses, and Asher — heartily agreed.

Next I would like to discuss the fact that Maverick has spent the past two weeks of kindergarten breaking my heart with reports that no one will play with him at school. I told him to give it time, he will make friends. He’s such a gregarious little guy, I honestly think he scares some kids with his loud voice and … zest. But that’s who he is, and it’s just right, and we would never tell him to take it down a notch. Things just take time to settle.

So … I put on my confident mommy voice and said “IT WILL BE OKAY! DON’T WORRY!” and smiled. But seriously, I died a little inside every time he talked to me about it. His eyes would get wide and his voice would lower to a whisper: no one will play with me, Mommy.

Then he came home with this, 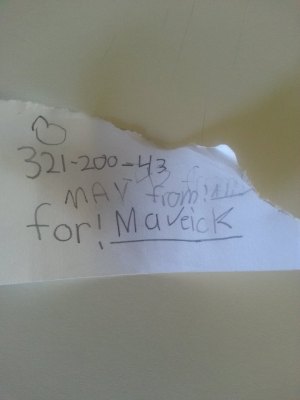 Which I can’t say for sure I understand, but it appears to be a note with some numbers on it. From a girl.