This seems to be a recurring theme in my life, but I’ll go ahead with it anyway: this week was very long and very hard. I guess most of them are, right?

This week, Asher threw his shoe at me while I was driving. Kid’s got good aim; it hit me squarely in the head. Both boys made me so mad (in a separate event) that I pulled the van over, took the toys away that they were playing with and dumped them in a parking lot. I’m sure it made another child’s day.

This week I yelled. A lot.

This week, the next-door neighbor’s dog got out and terrorized my children such that they were unable to play in their own front yard for an entire day. We also got caught in a torrential downpour not once, but thrice.

This week was a blur of crying, yelling, “I’m sorry’s,” meals, cleanup, laundry and Band-Aids — times six. It’s been six days since Robbie last had a day off from work. Every day for the past six days I woke up, got sucked into the vortex, Robbie went to work and came back home to find that I had emerged from the vortex in a shell-shocked state.

This summer is crazy. Oh, what? You don’t know what I mean? Okay … let’s see. How can I rephrase? It’s cray cray up in this bitch. It’s off the chain berserk, RIGHT HERE, IN MY HOUSE, and I am handling all of it by myself because I wanted three children and I wanted to stay home with them and no, I didn’t want to be a Nurse or a Dermatologist or even an Esthetician which my parents strongly suggested and I wish they’d suggested more forcefully. And no, my husband didn’t want to get a degree in Law or Medicine or something fancy because he can sell the shit out of anything and would rather do that instead.

So here we are, nearly 9 years married without much to show for it except a lot more wrinkles and a lot more fingers and toes to pry loose or kiss, depending on the situation. 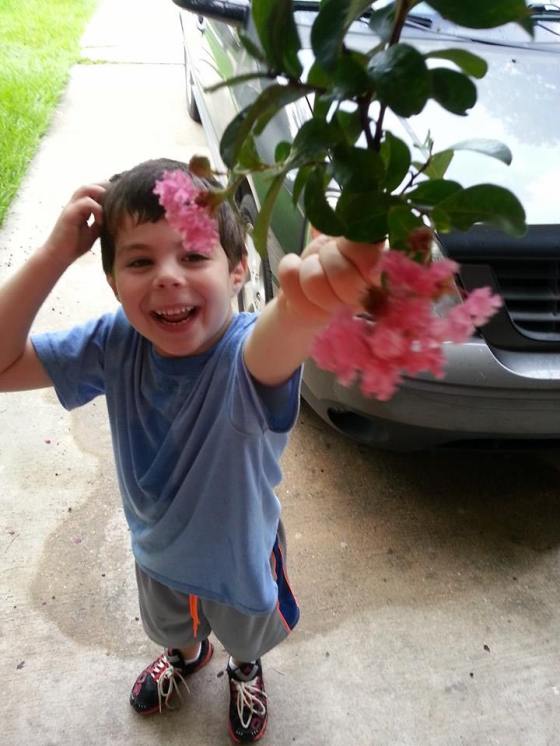 So, about this summer.

I knew it would be crazy, so I don’t feel as jarred by it as I might have … but wow. It’s still jarring. It’s nonstop action from the moment I get up until they are all tucked into their beds at night; I’m suntanned and exhausted and living on an extremely acidic diet comprised mainly of chips and salsa. My husband is working really hard and not enough people are buying cars or warranties so he looks as tired as I feel when he gets home. I have a feeling that when he looks at me at the end of the day he wonders what the hell happened to make me look like that, but he just says, “You look tired.”

We are running on a hamster wheel that would feel monotonous but for the fact that it’s simply never EVER boring because not one person who lives in this house is boring. And when I find myself painting Maverick’s big toenails and telling him, “Here is some paint that you can peel off whenever you want to — no more peeling paint off the house or the back door” I have to wonder if other people are going through anything like this.

Motherhood can be incredibly lonely for that reason. Wondering if you’re the only one. It can feel very much like you’re on an island and you don’t know what you’re doing and you have to just deal, but it seems like everyone else is dealing fine so you can’t speak up and say, “Does anyone else find it crazy up in this bitch?!”

Well, I find it crazy, so you’re never the only one. But sometimes I feel like parenting should be a two-person team against the children, but the other half of my team isn’t home very much. Three against one is kind of tiring. I mean, clearly I’m winning — but it takes a lot of effort. 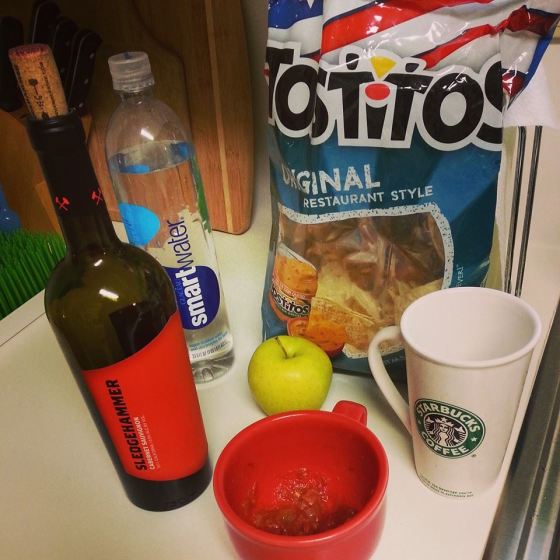 These are my food groups. (That’s salsa in the red cup.)

This morning, I was in the vortex of breakfast-making when I overheard Maverick saying “Daddy, do you have to work today?” And Robbie said yes, but he will be off tomorrow. Maverick and Asher chattered about how we’re going to a birthday party this afternoon and they wished he could come too. And then I heard my husband, that tired man I ignore a lot, the man I kiss hello and goodbye out of habit and sometimes half pay attention to, talking to them.

He said, “I wish I could go, too. But I have to go to work to earn money. I have to go to work because I want you to have everything.” And I literally almost started bawling into their smoothies, and totally want to cry right now just thinking about it. I know what he meant by “everything.” It’s not a house full of commercialized crap, necessarily. It’s the good things, the important things. He works so hard, and I do too, so that our kids can have “everything.”

He gets embarrassed when I write about him, but I’m telling you … if it weren’t for that man, in all his weird, charming, infuriating ways … I would be locked up in a loony bin somewhere. It would be crazy up in another, padded-walled bitch for me.

My teammate believes in me. So I’m not actually alone, and I suppose that means I can dig deep and stay on this ride called The Ridiculous Summer of 2014. Or TRS for short, which just so happens to be interchangeable with That’s Really Stupid.