An injured bird has been flapping around our yard for two days. We would have captured it yesterday (when Robbie was home) and get it to someone who could help it, but it disappeared, so we continued about our business. Today the boys found the bird and were trying to catch it when I realized what was happening and explained the bird was hurt and they were scaring away what life it had left.

LET’S HELP IT! They yelled.

HOW CAN WE HELP IT! They shouted.

Like I’ve said before, handling normal life circumstances is a whole different experience when you have small children talking loudly at you while you try to think. I spent about an hour trying to figure out the best course of action, during which I forced myself to carefully pick up the bird and put it in a pot … which I then proceeded to carry around with me.

I called Robbie because that’s what I do now. I used to be the kind of woman who handled stuff on her own and then called him after the fact to tell him how it went. But now I’m the woman who can’t make sound decisions because children are jumping up and down yelling things like, HEY, BIRDIE! YOU’RE GOING TO LIVE! RIGHT? RIGHT BIRDIE? DON’T DIE! and asking questions about life and death. 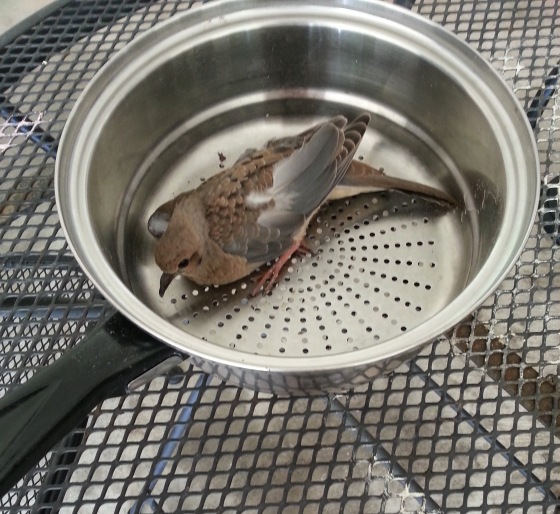 In the end, I fell back on what I was raised to do and told the boys we were going to pray for the bird.

Maverick reverently whispered a beautiful prayer before we went inside for lunch. I explained over peanut butter and jelly sandwiches that if we took it to a vet, they would probably just put the bird to sleep. Maverick nodded like he understood. A little while later, he disappeared to his room. When he came back, he said “I was just in my room putting all my birds to sleep. Shhhh … they’re all tucked in.” Which is when I realized that I never properly explained what put to sleep actually meant.

There’s probably a “right” way to do things, which is not ever the way I end up doing them. The “right” thing would be to transport the bird to someone who could help it. But I have three little kids, and the logistics just weren’t in my favor. I fear by writing this honest account of our day, I’m bringing judgement upon our home. I’m sure there are people who would have woken up the sleeping baby, loaded all three hungry kids into the car with the bird, driven to LSU, somehow finagled their way into the Vet School and delivered the bird. I hope when the kids are older, I can be that mom. Today, I’m not. Today I did what I could, which was not very much, may that sweet bird rest in peace.
Sometimes I snap out of my fog and realize that there are adults who somehow manage to do things the right way. They send birth announcements, follow etiquette, bring food when appropriate, say and do the right things, visit the dentist regularly … and then there is me. I often feel lonely in my corner of irresponsibility, wedged somewhere between moms who smoke meth in their bathrooms, and moms who have their manicurist on speed dial. I’m here in the middle with the other cracked-heel-skinned women who don’t have a primary care physician, I suppose.
This weekend I went to my parent’s house to help organize a few things, and my mom pulled a white garbage bag out of a cardboard box full of random items. “What’s that?” I asked. And then I saw the three items of clothing inside: a white eyelet shirt, a floral skirt with the same eyelet running through it, and some kind of gown. It’s her wedding dress. She cut it up after they married and made clothes out of it because she’s that kind of practical. And I thought, okay, so this is clearly where I get it from. After my wedding I had my gown preserved in an attempt to be a real grown up. My preserved gown is now safe in its box.
In a black garbage bag.
In a closet.
It just makes me laugh that both my mother and I had our dresses (or what’s left of them) in a garbage bag,  in a closet. Robbie tells me I can’t ever think my mother is ridiculous because I’m very much like her. And you know, I don’t mind. I think she’s pretty great.

Tonight I walked into the bathroom to find Maverick gnawing the heads and hands off of action figures. “I’m playing a game where they’re supposed to be hurt,” he said, as I gathered tiny hands and heads and threw them into the garbage can.

“Oh, and Mommy? The cowboy lost his hands and then he went down that tube in the back of the toilet tank.”

May he rest in peace.

4 thoughts on “The One About Death and Wedding Dresses.”