My mother is very sick.

She is also a very private person, and probably won’t like that I’m putting on the internet that she is sick. But I am not a private person, and I don’t know how to deal, and by the end of this post you will likely understand why today is the day that I decided to write about it.

My mom and I are close. I don’t have siblings, and my parents were young when they had me — just 21 years old. I was so much older than that when I had my first child; I can’t imagine my 21-year-old self caring for a baby, but my parents were and are amazing. I remember my dad’s 26th birthday … he got an ax, and it totally freaked me out. What did he need an ax for? But there are pictures of him grinning with it, and he looks so young. I guess because he was.

A year or two later, my mother and I were in an accident. It was winter, and raining. She was wearing a plaid flannel shirt. Daddy wasn’t home yet, and she needed something from the store. We set out in the little tan Datsun, which had no seat belts. We were just a mile or two from home when we came upon a car that was sitting in the middle of the road. We swerved to avoid it, lost control, and flipped several times before landing in a ditch.

Esther, that’s my mother, slung her right arm across my body to keep me from slamming into the roof of the truck. When we stopped rolling, I didn’t have a scratch on me but she suffered enormous internal injuries. Neighbors came down and dragged me out of the truck window, and I remember seeing her bleeding hands and being terrified. For years after that she had the habit of slinging her arm across me in the car and I made fun of her, but now that I’m older and have my own children, I tear up every time I think about it. Because of course she held me down. I would hold my children down too, and slam into the roof of my vehicle a million times over if that is what it would take to keep them safe.

Mothers are amazing in what they will suffer for the sake of their children.

My mom has been sick off and on for as long as I can remember, and the doctors could never seem to get to the bottom of what was going on. In the past few years I have grown more and more concerned as I have basically watched my mother die right in front of me. Her skin, which is naturally a ruddy color, turned a shade of green that varied depending on how she was feeling, and finally it started to look gray.

The gray week was the week that her cardiologist told her unless she made some drastic changes, she was going to die. 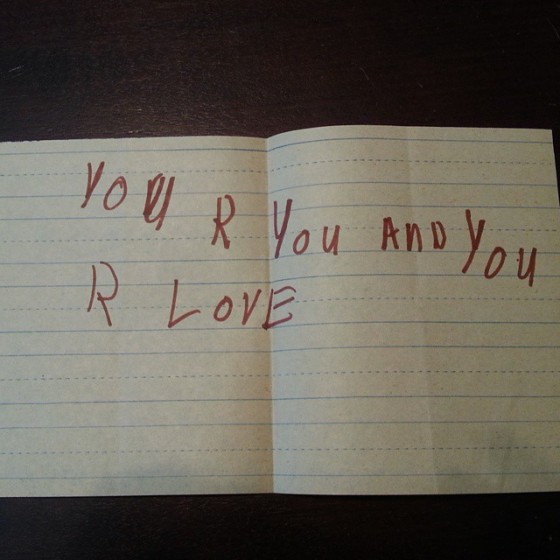 I found this while going through an old folder of stuff my Grandma saved. It looks like she kept everything I ever gave her. My mom thinks I wrote this in first grade. It’s totally deep, right?!

When a parent delivers news like that, news you don’t find surprising because you already knew it deep down, the absence of surprise doesn’t make it any less upsetting. Once the words are spoken into the air, it’s real and you can’t get away from it. I am a person of action, which is both an obnoxious quality and an effective one, and the very moment she told me I started creating a mental checklist of things that needed to HAPPEN. For the next few weeks I was a mad woman, running myself ragged trying to take control of a situation I have absolutely zero control over.

The thing about grief, or in this case, worrying yourself sick, is that if you’re doing something you think will “help” it more than likely is not helping. It’s only making YOU feel better because you can lay your head down at night feeling like you didn’t just sit idly by and allow something terrible to happen. None of us have the power to “allow” or “stop” an illness, and yet, I had to do SOMETHING.

So I put her on every prayer list I could find. Catholic, Baptist, Seventh-day Adventist … I didn’t discriminate. If they were praying people, I asked them to pray for her.

I prayed diligently on my own.

I cried and I yelled.

It was literally all I talked about to my close girlfriends, BLESS THEM. I can’t say enough how vital close girlfriends are when you’re going through A Thing That Sucks. I love them for listening to me and loving me despite the nonstop barrage I hit them with on the daily. I would say, “I’m sorry I’m going on and on …” but did that stop me? Nope. Not in the least. If you have a friend who is going through something difficult and you feel awkward because you don’t know what to say to her, don’t let that stop you from listening. Having someone listen is incredibly helpful.

Eventually, I accepted that there is nothing I can do but love her through this journey she’s on, and hold tight to the belief that she’s going to get better and go on to live many, many more years. She has to. There is no other option.

I wanted to talk about this before, but it wasn’t the right time. Today is the right time, I think. I hope. I was inspired to share this particular story today because I was talking to her this afternoon and admitted that I’ve been experiencing major anxiety because, hello. Do I even need to explain? And our conversation turned to prayer. I totally believe in prayer. I’m no Bible-thumper, but I believe in God and I desire Him to lead my life even though I don’t live it in the most graceful and serene way all the time.

Okay, fine. None of the time.

Anyway, I said to her “Of course I pray, I ask God every night for protection and guidance,” and she cut me off and said in that stern way only mamas can, “YOU NEED TO STOP ASKING FOR THINGS AND START THANKING HIM FOR WHAT HE HAS ALREADY DONE.”

I have spent weeks, people. Weeks wallowing in deep, strangulating stress, asking and praying and muddling through. And the woman who has the most reason to be asking God for something told me straight up I needed to spend more time thanking God for what He has already done.

Despite everything she has been through and continues to go through on a daily basis, which is a lot, she is still thankful. She admonishes me every time I so much as hint that God might not know what He’s doing up there. Everything happens for a reason, she says. Well … okay. I try to accept that. Sometimes it’s hard.

My mother will maybe be mad at me for writing about her, but I had to because this is the woman who held me down in that truck. This is my mother. All mothers are extraordinary in their own special way, but mine has a distinct grace about her that allows her to happily say “It could always be worse!” even when the walls are all crumbling down. Because she’s right, it could always be worse. She could be dead, and she’s not. Because she’s going to GET BETTER.

So really, this is a damn good day. And if my mother can seize it and be grateful, I will too. And so should you.

Oh yeah … and my dad bought me a book. It’s perfect.

3 thoughts on “You Are You And You Are Love.”

Pepper wants to be #POTUS when she grows up. Here she is telling her (male) VP to put a mask on.
It won't stop until WE stop it. As a parent, my focus is on steeping my children in diversity and teaching them how systemic racism is designed to keep white people in power. Allyship can start at any age. You are never too young or too old.
I don't see the problem.
This is a tough one for me. I've always had great intuition, but I lacked the confidence to trust it. What's the use of having badass instincts if you willfully ignore what they're telling you?!
Our kids are now old enough to go off and play without much concern about one getting lost and it is glorious. It took what felt like forever, but we made it.
Today is the perfect day for a picnic in the sand.