I have been dealing with two sick toddlers on and off for the past 10 days, I haven’t been exercising, I’ve been eating terribly and yelling a lot. I think I might be half-sick myself, I can’t think of anything funny to say, and I’m cranky because I’m hungry. Now that I’ve gotten the whining out of the way, I can tell you about the little optimists I’m raising.

We went on a boat ride this weekend.

Because something is wrong with me, I dressed us like it was still summer. We were the only people on the river without jackets, and my children were huddled and shivering by the end of it all. I just held my head high, like yeah. 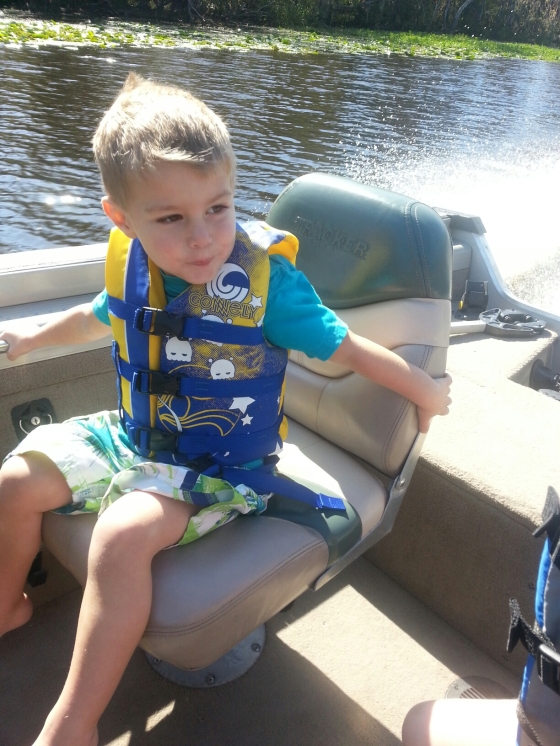 I drew the arrows on the picture above because apparently some of the good people on Facebook thought the entire log was an alligator. Um … if that were the case, I wouldn’t be smiling. It was a baby gator sunning itself, and I heard myself yelling, “WAIT! LET ME TAKE A SELFIE!” because I’m quickly becoming that person.

Now, no disrespect to anyone, but we saw several houses with slides or rope swings, which I assume means people actually swing or slide into the very same river that the baby alligators and the mama alligators live in. What the hell are they thinking? River people must be optimists.

Afterwards, we went to McDonald’s and Maverick dropped his ice cream cone on the floor. He quickly picked it back up and tried to continue eating it. I took it away (i.e. shrieked and jerked it from his grasp) and explained why you can’t eat anything that has landed on a McDonald’s floor … E-V-E-R.

He looked at me and said loudly and with zest, “At least it landed on my pants first!” And then he proceeded to lean over and lick ice cream off the leg of his pants.

Optimists, man. They don’t worry about Ebola, Salmonella, or being eaten alive. They just live.