I’m a late bloomer and rehabbed people-pleaser, and it wasn’t until I gave birth to our first child that I finally grew the hell up. 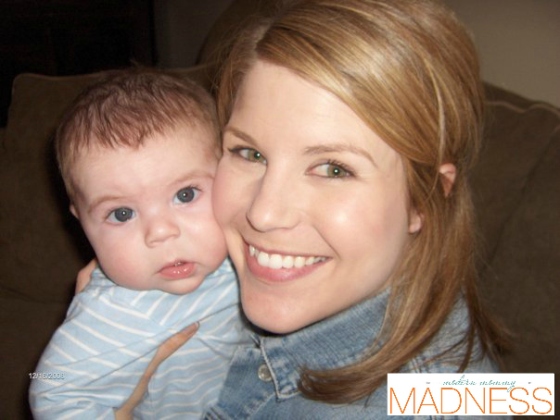 This photo was taken on my first day back to work after a 4-month maternity leave, January 2009.

He broke my tailbone entering the world. I was bucked off a mule at age 8, which broke my tailbone and left it pointing inward. I was never aware of this until 20 years later when, after two hours of pushing, the doctors determined my baby boy was stuck behind it.

With the threat of a C-section looming, my son and I furrowed our brows, rolled up our metaphorical sleeves and did what we had to do. I pushed with all my might and he re-broke the bone, forcing his way out. It sounds awful, but really, what’s a broken bone when you’re pushing a human being out of your vagina? It was just another source of discomfort in an already uncomfortable area (and it makes a pretty fantastic story).

I was so unsure of myself when I became a mom. When I think about that person—so nervous about changing her baby’s diaper that she had to have “help” doing it for much longer than I’m comfortable admitting—I can’t be mad at her. She had no idea what she was doing. I give her grace. But also, she really needed to grow the hell up.

And so, because the universe knew I needed it, I was given a very challenging first child. I was forced out of my comfort zone in every way, having no other choice but to learn to ignore what everyone else said and go with my gut.

I realized that it doesn’t matter what other people think about my parenting or my children, because they are mine. Mine to screw up. Mine to encourage. Mine to raise into functional human beings. Mine. No one else’s.

I stopped apologizing, for the state of my house, for the food that I did or did not cook, for my appearance, for my child’s personality. One day, I simply ran out of fucks to give. I don’t owe the world apologies for being who I am, and I certainly don’t want my children to grow up under that assumption. Part of growing the hell up is realizing how fantastic you are and owning it.

A typical scene at my house. Poor kitty.

I found inner strength. Parenting my strong-willed oldest child broke down every wall I’d ever built. It caused me to question every belief I’ve ever had. I had to throw out everything I’d read in every single parenting book and start from scratch. I am no longer a delicate flower—I can throw a 60-pound child over my shoulder and haul him out of Target if I have to, and he knows it. It took time, but eventually I discovered a durability in myself that I didn’t know existed.

I realized that I am a damn good mom. It was a slow progression, but one day I realized that I haven’t completely screwed up this complicated child. In fact, I’ve done an amazing job with him. He is still challenging, and there are still days that I struggle, but because I have grown the hell up I don’t question every choice I make anymore. I am confident in what I say and do because of everything listed above.

That boy who has given me so many gray hairs in just seven short years has also shaped my spirit in countless ways. He helped me grow up.

And thanks to him, I also always know when it’s going to rain, because my aching tailbone tells me.