My child accidentally concussed me on January 4. It’s an interesting story that I am saving for my Listen To Your Mother audition next month, so I won’t go into it here just yet.

For some reason, even though I couldn’t remember my own birthday, I totally thought I was fine. “You don’t need to take me to the hospital,” I said to my mother-in-law (who is a saint). “I’ll be …”

Then I trailed off. And I was slurring.

“Did I already tell you that you don’t need to take me to the hospital?”

She steered me into the car.

For a full two weeks after my injury, I insisted on trying to carry on with my normal activities as though nothing had happened. I remember almost none of it. It was almost exactly like that time I had about five too many mimosas at brunch and thought I was still okay to drive, and then I backed into another car trying to get out of my parking space. Everyone who was dining on the patio turned around and stared. I was mortified.

Clearly, I was not fine after suffering a head injury. I was saying things I normally would not say, and doing things I would not normally do, and after embarrassing myself all over town it eventually it sunk in that I really was not going to be able to “power through” this.

And then I got really angry.

The anger phase sucked. I couldn’t exercise, I could barely drive — I say “barely” because I could manage to putt 10 mph for two blocks to get my smaller two to preschool every day, but anything faster than that triggered my vertigo — I wasn’t supposed to look at screens. I did anyway, until I ended up in the emergency room a second time (pictured below).

Brain injuries make you do stupid things like smile when you’re in the hospital.

I missed writing. I missed my online communities. I missed feeling connected to the world outside of my home.

I was alone, with nothing to do, a lot.

I had time to think. SO MUCH TIME TO THINK. At first I was like, maybe this is a gift. Maybe I can learn from this. Maybe I need to work on becoming more mindful.

And then I realized … mindfulness sucks. Mindfulness blows. Mindfulness is the worst possible thing when you are a writer who is unable to write. I had the most amazing, deeply profound thoughts.

And then I forgot them.

Because I had a concussion.

Today, I choose to be thankful.

I am thankful because my children are alive and even though one of them always seems to have some sort of affliction that requires a trip across town to our pediatrician’s office, I am thankful to have a car to drive them in because otherwise I would be forced to depend on the kindness of others or the public transportation system.

I am thankful that we have a safe home to live in, even though it’s not ideal and rent is ridiculous and every time I walk down the hallway I get disgusted with myself for not following through and hanging the remainder of the family photos that are stacked in my bedroom, because I am thankful to have a family to take pictures of.

I am thankful to have a body that works, even though I wish it was maybe a little less fat, but really I don’t even care about that because my body allows me to live my life in whatever manner I feel like on any given day.

I am thankful to be a woman in America in 2015 who has the freedom to make choices. I am thankful that I have chosen to bear three children and then shut down the baby factory, and my husband and I made that informed decision with the knowledge that it was right for us and it was no one else’s decision to make.

I am thankful for being. For life. For joy and love and yes, even grief, because feeling those things means I am still alive. 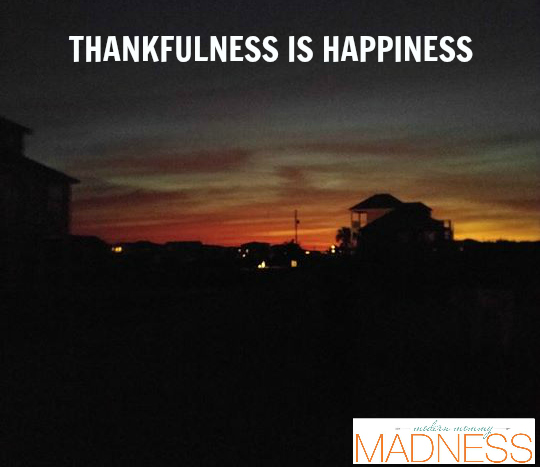