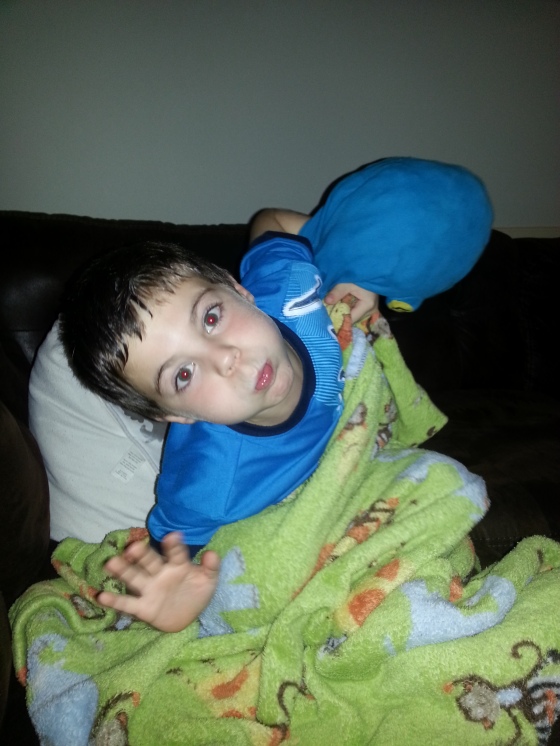 He rides his bike without training wheels. He stands at the end of the driveway alone and waits for the school bus while I watch through the kitchen window. He insists on wearing boxer briefs.

On his birthday, I offered him a special pin to wear to school. He insisted on putting it on himself and I was silly enough to argue, warning that he might get poked, but he wrested it from my grasp and pinned it directly in the center of his belly. “I’m SIX now,” he said. “I can do things myself.”

He can. And he does. Maverick has always been fiercely independent, and it’s hard to find that line between being available when he needs me and backing off when he doesn’t.

Being a mom is hard.

His room is scattered with Legos and he keeps the door shut at our request, so the baby won’t sneak in there and eat them. A few nights ago I found him sleeping on the floor, surrounded by tiny helicopters and fire trucks he built from his stash, and I tried to pick him up to put him back in bed. But I can’t anymore — he’s too heavy. I stood in the dark realizing, this is it. This is the end of the little years for Maverick, and the beginning of the bigger ones.

I try to embrace all the stages — some have been easier than others — but this boy has a way of making me SO mad, and laugh SO hard, I can’t imagine him belonging to anyone else. As much as I struggle at times to parent him, I know I was specifically chosen to be his mother.

The other morning before I pushed him out the door to meet the bus, I whispered a prayer in his ear. He looked straight at me and said “Thank you for doing that, Mommy. It makes me feel less nervous.”

And then, he was gone.

One thought on “Six.”

We all saw what happened. Sometimes actions are so aggregious that there is no defense other than "you saw it wrong." No. We didn't.
(Photo courtesy of @theadvocatebr taken by @hscheinukphoto)
Here I am with 8-week-old Maverick, circa 2008. I had no idea what I was doing but I knew that being a mom was way more fulfilling than working as a Claims Adjuster for State Farm Insurance. Little did I know, it would also be much, MUCH more interesting.
I love this!! #parenting #soberAF #sobermom #mentalhealth
This is EVERYTHING. (credit: @cahier.dart)